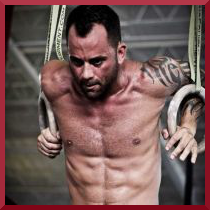 A Florida native, Chad has been heavily involved with fitness his whole life. For 30 years, kickboxing and Martial Arts have played an immense role in Chad’s life. In high school, Chad was a standout multisport athlete. As a football player, he received All-State honors and was heavily recruited by division 1 schools. He eventually took his talents to the University of Northern Alabama where he enjoyed a successful college football career before returning to South Florida. Since then, he has been working in the fitness industry managing gyms in the Miami area. Chad has found CrossFit and it has changed his life. He is a Level 2 certified CrossFit and Gymnastics coach.” 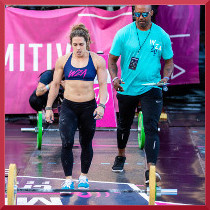 It wasn’t until her 20s that Lulu got involved in fitness. Her journey started with bodybuilding but eventually she fell in love with the functionality that Crossfit offered – it wasn’t just about the body looking good, but moving great as well! Besides being a CF Level 1 trainer, she also has certifications as a personal trainer, body mechanics, functional and core training specialist. Outside of fitness, she’s also studying to become a nurse.
Growing up as an overweight child, she knows there’s no short cuts, and in order to get results, you must put the work in – so if she’s giving you tough love, it’s because she cares. 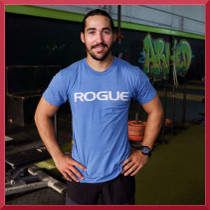 My background in sport and fitness goes back to when I was kid. I played a lot of different sports, Tennis, Fencing, Soccer, etc.. but there was only one that I fell in love with, baseball. Started at the age of 8 and played until I graduated from High School. This sport taught me discipline and teamwork. Wasn’t too long after I finished my career as a baseball player that I found CrossFit, introduced to me by a friend. I spend so much time at the gym that Jhon (Head Coach) gave me the opportunity to intern and help around. That was when I found my passion for coaching and helping others improve their lives. Took seminars and learn a lot from the other coaches, I became a CrossFit Level 1 Coach, I also got certified as a Running Coach by Pose Method and Gymnastic Coach. Furthermore, my experience as an athlete has helped me too, I competed in several local Crossfit competitions placing 3rd in one of them. I’m always trying to learn more and improve myself as a coach, I’m looking forward to taking the Crossfit Level 2 certification and level 2 Gymnastics certification .

Nate Scola is originally from Apache Junction, AZ. He has spent the last 7 years as a college football coach and strength coach. Nate received his undergraduate degree from Wabash College (IN) and also owns a Master’s degree in Kinesiology from Georgia Southern University. While at Wabash, Scola earned All-America, MVP, and Defensive Player of the Year honors as a linebacker. Nate has always had a passion for fitness and strength and conditioning, and was introduced to CrossFit in 2016. Most recently, Nate has become more competitive within the sport, qualifying and competing as an individual at the 2020 Wodapalooza CrossFit Festival, and on a team at the 2021 Semifinal Granite Games. He finished 141st in North America in the 2021 Individual CrossFit Quarterfinals. As a coach, it his goal to positively impact as many people as possible while also pushing themselves to be their absolute best on a daily basis. 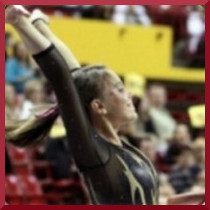 Carly Scola is a native from Mesa, Arizona and currently serves as an admissions counselor and assistant strength coach at a local university here in South Florida. Carly is a former NCAA Division I gymnast at Arizona State University. While at ASU, she received her undergraduate degree in Communications. She then went on to receive her Master’s Degree in Kinesiology from Georgia Southern University. After her stint at ASU, Carly spent a number of years as a head optional and compulsory coach at the club gymnastics level. Throughout her entire career as an athlete and coach, Carly has always had a strong passion for fitness and helping others. She was introduced to CrossFit in 2016 and has been actively involved in the community since. Her goal every day as a coach, is to impact the lives around her and challenge others to become the best version of themselves.